On Tuesday, September 11, 2001, my husband and I woke up before dawn in Rome, Italy to fly home through NYC to Washington, D.C., where we were living at that time. He snapped this picture of me as we were leaving for the airport. 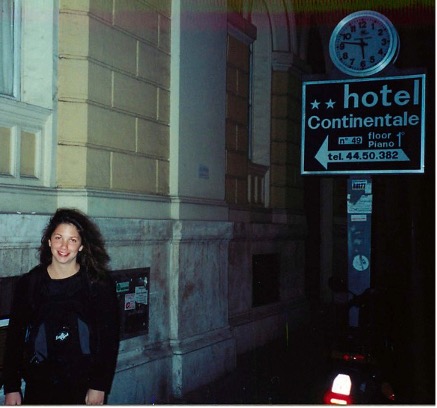 Around 11:00 am Eastern time, somewhere over the Atlantic Ocean, we watched on the seatback screen as the trajectory of our American Airlines flight abruptly deviated sharply north. The flight crew announced that the entire East Coast corridor had been shut down and we were being diverted to Canada. We were suddenly heading for Gander, Newfoundland. Later, our pilot announced that we were being diverted again, this time to St. John’s, Newfoundland.

As we taxied down the runway we noticed the wings of our plane were over grass, not tarmac, and there were many planes ahead of ours. Once stopped, voice shaking as he tried to compose himself, our pilot’s words were so unreal, so horrible, so shocking it was hard to process what he was saying. We listened first confused, then heartbroken, and worried sick about the many very close personal connections we had to everywhere directly affected.

2001 was pre-iPhones and regular high-speed internet, so for the first few hours we were waiting on the plane, we were hearing all sorts of misinformation, including that there was a bomb on one of the planes at the airport, possibly ours. So when our pilot spoke to us through tears about his good friend who was the pilot of the plane that crashed into the Pentagon and started to ask all of us passengers to make similar sacrifices now too, we all… well… we were relieved when he clarified that he only meant of our time.

About 19 hours after we had boarded, we were permitted to take only blankets and pillows from the plane, our wallets, and toothbrushes, and any medications we may have in our carry-ons, to board school buses in the total dark of night, amidst law enforcement officers everywhere, to somewhere unknown.

Off that bus, we passed, outside and inside, through three sets of customs officers, before boarding another school bus bound for somewhere else. When that bus stopped, Red Cross volunteers corralled us up a ramp lined on both sides with more uniformed law enforcement officers and announced in English and in French that we were in downtown St. John’s at the Mile One Centre, the St. John’s Maple Leafs’ ice hockey rink. Oh, Canada!  First, we had to register by name and flight number, one by one, with the Red Cross. Then, around 2:00 am Eastern time on September 12th, we were able to use their phone bank briefly to let our family know we were alive and well.

From there we were ushered into the ice rink, which was cold as we had dressed for Southern Italy and for Washington, DC not for Newfoundland. We sat there frozen as we first saw images from the news projected onto the jumbotron. Then the Red Cross volunteers told us all the hotels and all secondary accommodations in the city and surrounding towns were full, so we were to proceed across a walkway to the Convention Centre where they would shelter us.

We went as directed toward the next unknown, then stared in disbelief as we entered. There were people everywhere, thousands of passengers from all over the world. The Red Cross volunteers had food on folding tables for us and apologized, as they handed us sheets to lay out on the floor wherever we could find a spot, that they were out of blankets and pillows. Then it struck me, we were like refugees of sorts, displaced people from all over the world, with little but the clothes on our backs, strangers in a foreign land, who could not return home until… when? The next day they opened up rooms for us where we could first watch the news and try to learn what had and was happening and when we might expect to get home.

We spent a total of 5 nights in Newfoundland as “plane people,” wearing the same clothes on our backs, being cared for by the kind and generous people “on the rock” like in the documentary and then the incredibly well done musical Come From Away (which, if you’ve not yet seen you really should).  I have a special spot in my heart for the good people of Newfoundland, for the colorful, picturesque city of St. John’s that I would much prefer to visit as a tourist someday, and for the Canadian Red Cross.

In the middle of the night on September 16th, we flew to New York City and landed to the sight of smoke still high in the sky where the trade towers once stood, where I had been a junior bridesmaid at my cousin’s wedding, and where my husband had worked in a law firm. Family of my clients and close friends of our friends lost their lives there that day. My heart is in my mouth, tears in my eyes as I write this…forgive me as I struggle to find words… #jemesouviens #neverforget

For weeks after my husband and I were safely home, I had dreams of being in airports, going through airport security, being on airplanes, and of finding shoes and trying to get them to Afghan children who were refugees… One local organization working hard to help families who were going about their lives working and going to school when their worlds were turned upside down and they suddenly found themselves fleeing for their lives, boarding planes with strangers, to places unknown, before they came here (and everywhere) from away, is the International Institute of New England.

In this 20th year since what we’ve come to call 9/11,  the Hingham Middle School all-school read is the young reader adaptation of The Red Bandana. When our daughter finished reading it, she gave it to me to read so we could discuss it. I noticed this on my nightstand this morning. 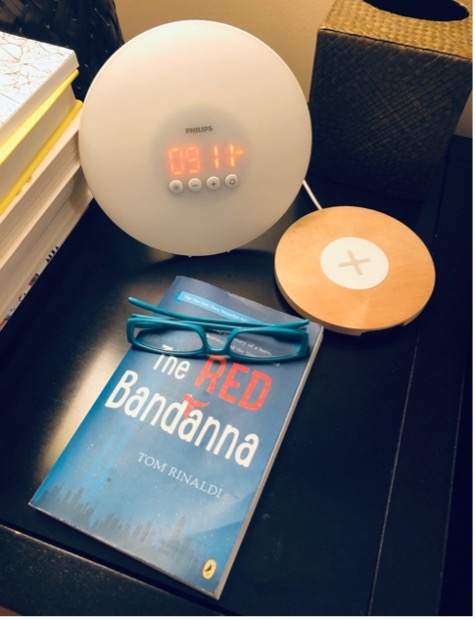 My husband and I explained to our daughter that 8 years nearly to the day before she was born, we boarded a city bus in St. John’s Newfoundland, Canada using “we’re plane people” as our fare as the mayor had allowed, and we bought a pen and a journal at the local mall so I could start documenting what we were experiencing in real-time, so that someday, after our recollections faded the edges of our memories, when our children asked us, “where were you that day?” we could answer well. This year, my journal brought it all back to me.

If we’re lucky, life goes on, and we want it to, yet if we stop and think realistically we know that any of us, at any time, could find ourselves displaced, our lives disrupted, needing to rely on the kindness of strangers for security, food, and shelter, the way my husband and I experienced on a relatively small scale that day and the way so many people all around the world experience every single day. All of us are on the receiving end of acts of kindness, compassion, and generosity sometime(s) in our lives, and if we are truly fortunate and if we genuinely want to honor the sacrifices so many made and the memories of those we lost, we have a chance to be on the giving end too.

As a dear friend of mine here in Hingham and her loving husband, who escaped and helped others to escape the trade towers and make it home to safety on 9/11, say every year, “L’chaim” (to life).

Wishing you peace of mind, comfort of heart, good health, great fortune, and abundant happiness made richer by the depths of the sorrows you have known.

With love and gratitude,